It was definitely the most all-around hard experience I have ever put myself through. Physically (obviously), emotionally (duh), and spiritually (I'm in awe). I don't know if I have ever felt so many  back-to-back testaments of the truthfulness of the gospel of Jesus Christ.

I was able to go on Trek as a youth leader, as a part of the YW Presidency I was accidentally designated as our ward's Trek Master. By the time Trek came around I was so ready to stop thinking about details and start pushing a freaking handcart. There was definitely a huge amount of burnout prior to even loading the buses. The evening prior to departure, I tried to put all that aside as I watched each youth and the supporting adults drop of their gear- gear, that the Pioneers likely didn't have, ie. sleeping bags, pillows, multiple changes of clothes, tents, etc. Most of my Young Women were excited, although clearly nervous about what was ahead. Most of the Young Men were quiet and ready to go.

When we arrived at Martin's Cove the handcarts were immediately loaded and we started on our walk for the day, a mere five miles. That day we entered Dan Jones Cove, Martin's Cove, and had a river crossing. It was a fairly easy walk with minimal hills and no blisters for anyone in our ward at the end of the day. Spirits were high as we walked in to our camp- another thing the Pioneers didn't have and proceeded to set up our tents. There were some mean mosquitoes that night in Sage Creek Camp, but that's all anyone had to complain about. The evening was filled with delicious food, really good company, and a lot of frog catching (they were
everywhere!).

The next morning began our first long day. Thursday dawned with a wonderful breakfast and a 16 1/2 mile walk before us. You'll notice I didn't just say 16 miles (as it would have been an easy round), when you've walked 16 miles pulling a heavy handcart, you notice E.V.E.R.Y. step of that last 1/2 mile. It was a long day. We had our fair share of troubles including, but definitely not limited to: a nasty sprained ankle on one of our biggest YSA's (he walked another five miles on it though), scarce water (totally unplanned), no communication with the Stake Base (see scarce water for how scary this actually was), knee issues, back issues, carrying a leader in the handcart, and BLISTERS! It was a long day. This was the third Trek for two individuals in our ward and they agreed that it was definitely the hardest and longest day they'd ever had on any Trek. But as we walked in to camp, our tents were set up and dinner was ready. To anyone taking notes for future Treks, GET CAMP JACKS! Life would have been so much more miserable had we not had Camp Jacks to set up our tents and throw our gear in the right spots.

Friday morning opened up another long day. 15 miles, but it included the Women's Pull up Rocky Ridge, more river crossings, and mud like you wouldn't believe. I don't know much about it because due to a scary allergic reaction one of my YW was having I stayed with her the entire day at camp. I was so upset at not being with the remainder of our group, but I know that this individual needed me that day. I also know that there was a greater purpose in my staying behind. I feel a lot more understanding towards the concept of leaving the 99 to go after the one. All I can say about this day is that when I  finally saw our ward's handcart flags coming in to camp surrounded by our dusty, worn-out, muddy-teethed youth and leaders I felt a deep, deep appreciation for how Heavenly Father must feel watching us go through our daily trials. I have never been so happy to say the words, "Go jump in the river," and clean up and bandage so many ragged feet. I totally get why Heavenly Father wants to bless us.

I feel like I get a lot of things now. Not everything, and that's okay. But I understand so much more than I ever have. There was something about walking along the exact trail that the Pioneers did. A trail that saw a lot of pain and suffering, but ultimately gave way to a miraculous rescue. President Hinckley stated that Martin's Cove is hallowed ground. I could feel that. It is certainly sacred to me.

The following pictures are courtesy of Chris McConnehey. He's awesome, the end. 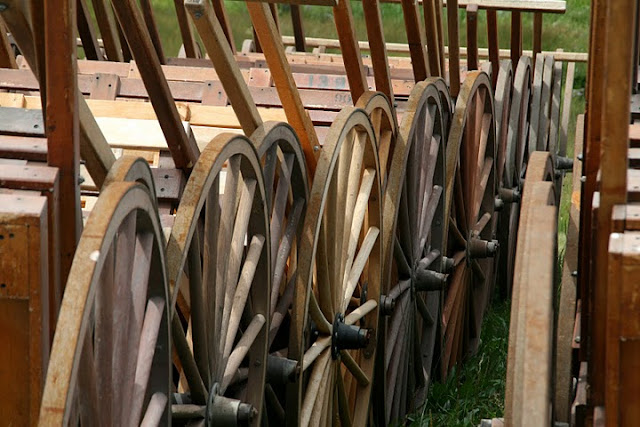 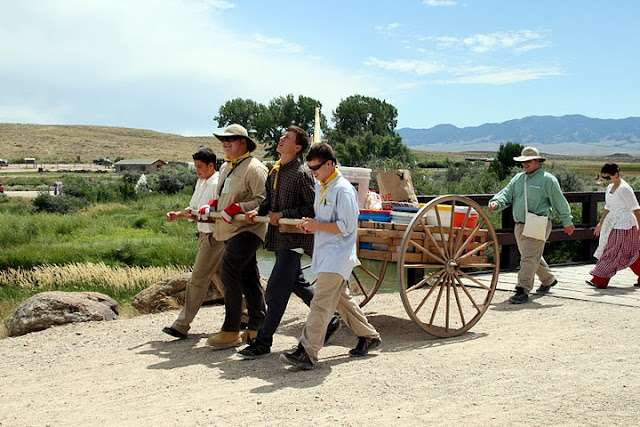 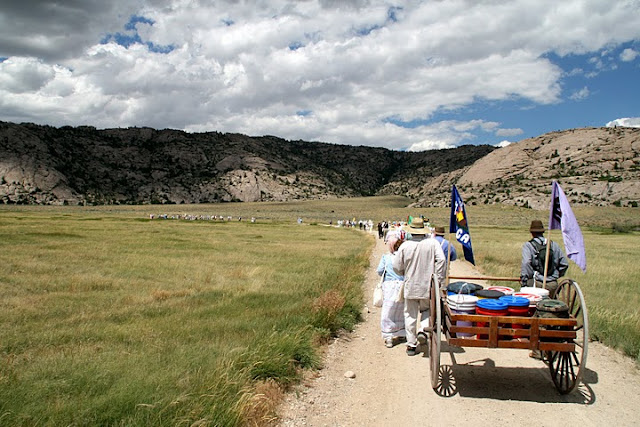 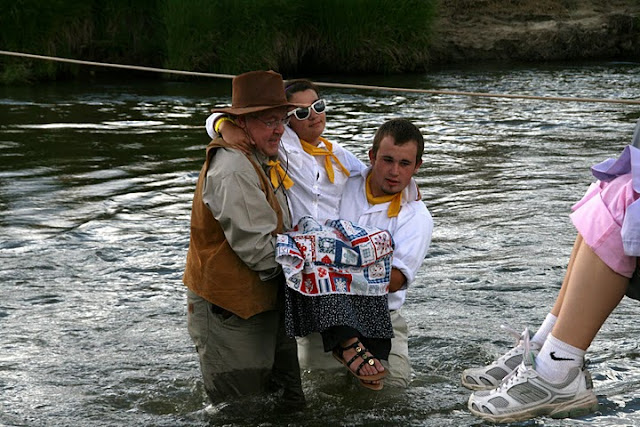 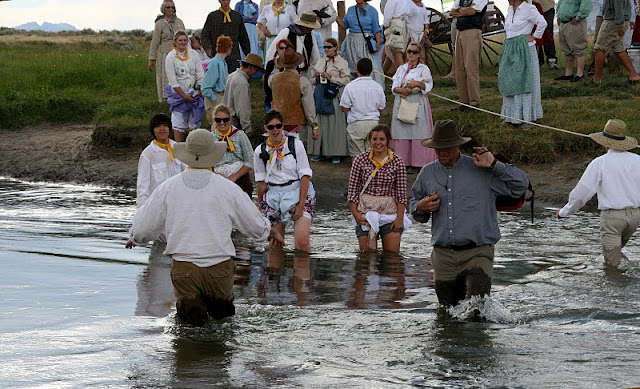 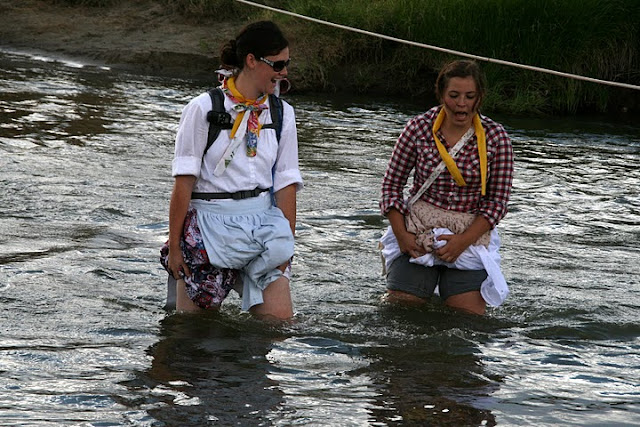 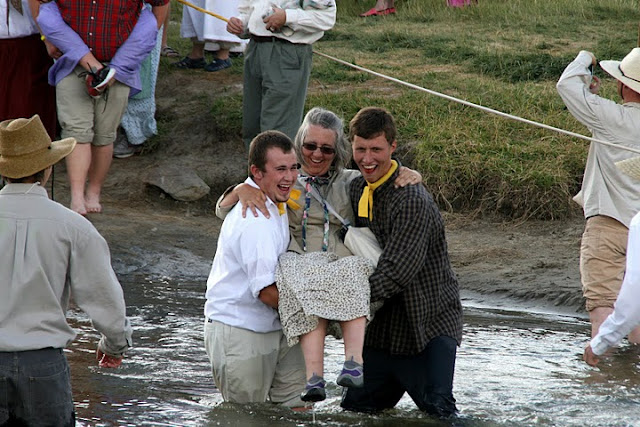 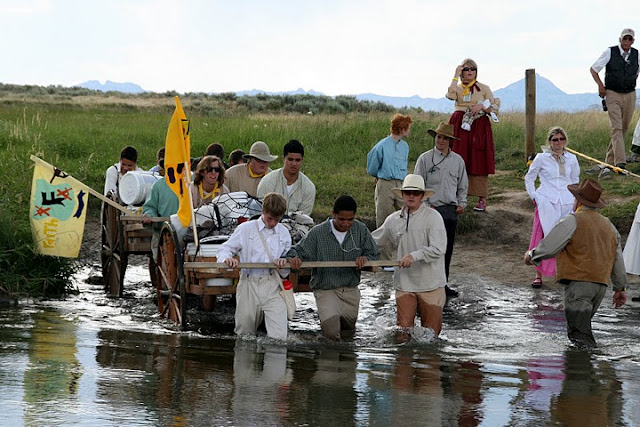 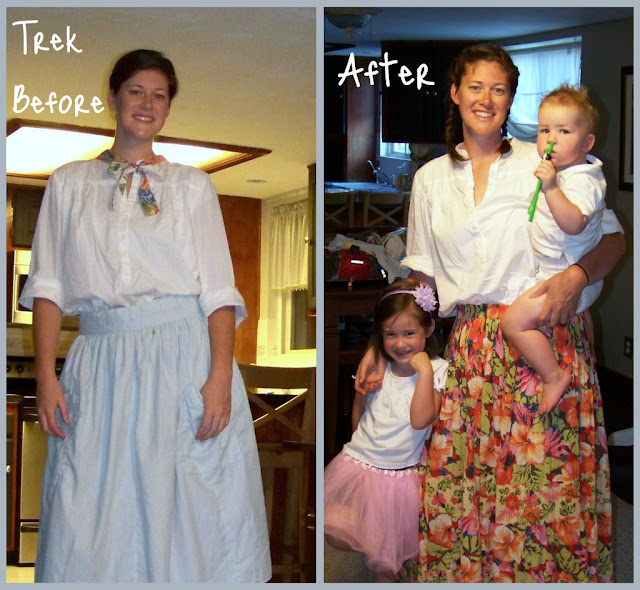 I really appreciate you sharing this special experience, I was tearing up the whole time. Thanks

The pictures really are amazing. I think that as a teenager Trek is one of the neatest experiences you can have. I've visited Martin's Cove but I can't imagine how incredible it would be to experience Trek there. Sounds like it was amazing.

I went on Trek as a teenager and it's an incredible experience! I'm glad that you were able to go! And I love the picture of the handcart wheels lined up!

Wow, what an incredible experience! Thanks so much for sharing. I'm sort of jealous that you got to get away from normal life to do that. But I can also understand now why you said a few months ago how appealing nursery sounded. :) Sounds like a lot of work, but it looks like it was well worth it!

Thanks for sharing Melanie. Keith was the Stake Trek Master 3 years ago and planned the journey on part of the Mormon Emigrant Trail south of here. More hallowed ground. It was life-changing for everyone involved, as you expressed as well. Keith literally couldn't talk about it for days afterwards without tearing up. You never know until you try it, I guess! And then you KNOW.